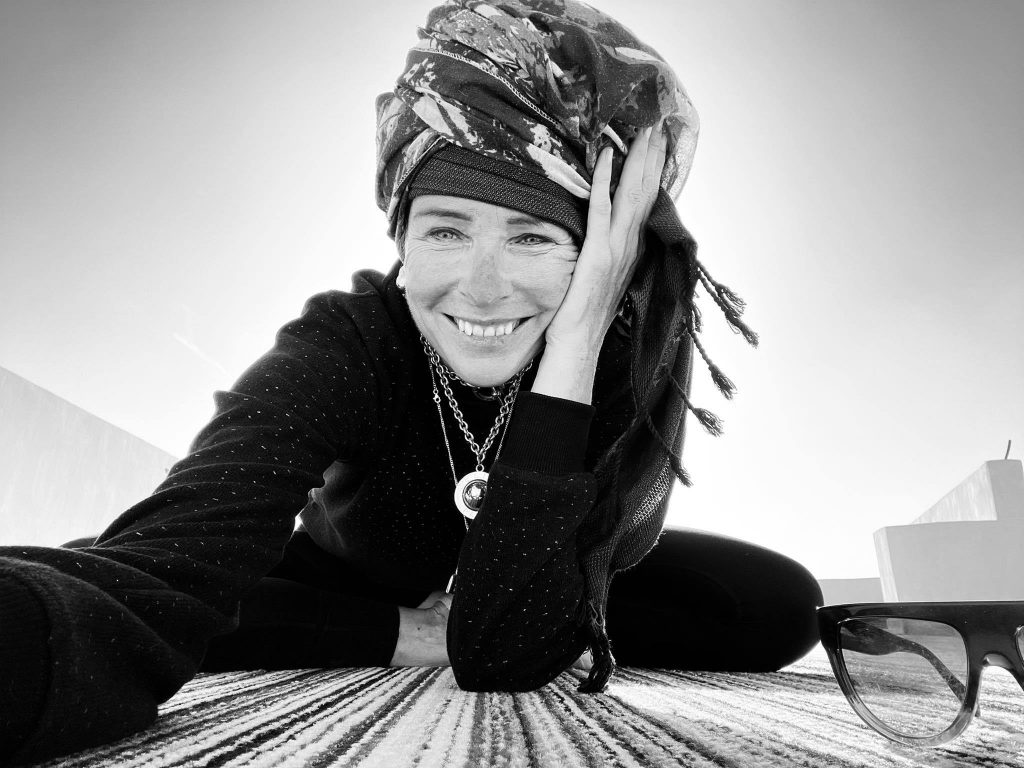 Tracey Ash is a deeply respected and well established leader dedicated to global unity and community education. She is widely regarded as the teacher who can bridge three essential fields: spirituality, quantum consciousness, and contact.

Tracey has been filming evidence of metaphysics for almost a decade, and in 2018, she was invited to the United Nations in New York as the world-renowned expert in the field of contact, where she shared her groundbreaking video material and expertise on the subject.

In 2020 Tracey collaborated with the Emoto Foundation (one of the most highly regarded global science and consciousness research foundations), where she co-created a study which she presented at Iyashi Fair in Japan (which is the world’s largest wellbeing expo). This work awarded her an honorary membership of the Science Institute of Japan.

In 2021, in an unprecedented world of covid and emerging consequences, Tracey moved to Egypt to prepare for a new earth by completing several projects. Two facilities, Habu Hotel EcoLodge and The Ark Abusir are built to support the next era of emotional intelligence and social impact. Tracey is also the creator of The Ark Magazine. 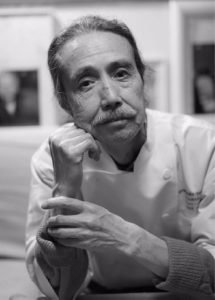 Eiichiro Yamada is a third generation chef from Tokyo, and an advocate for natural farming. He was taught to cook by his father from the age of five. From an early age Eiichiro connects deeply to nature, and learns how to cut, prepare, cook, and serve the fish he catches in the Arakawa River. At nine years of age he started his first business selling fish he catches.

At 18 he became a professional chef and at 21 he moved to the United States to continue learning and growing. His work takes him from San Francisco, to New York. It’s an exhilarating time of growth for Eiichiro and he makes many connections.

Circumstances eventually take Eiichiro to London where he is hired at the London Continental Restaurant. He also studies Politics and Economics during this time.

He returned to Japan to study philosophy and cookery at the Japan CI Association. Eiichiro is a pioneer in the macrobiotic industry and a man ahead of his time. In 1976, at the age of 27, he opened Japan's first natural food restaurant, Mominoki House, in Harajuku, Tokyo, in order to offer food that is both gourmet and healthy.

Celebrities are attracted to his gift of cooking. They include Stevie Wonder, David Bowie and Morgan Fisher. He has also catered for the tours of Janet Jackson, Paul McCartney and the Rolling Stones.

For 46 years, he has been eating, creating and serving food based on macrobiotic philosophy. And together, Eiichiro and his restaurants continue to thrive. At 72, Eiichiro is a very energetic and happy man with new ideas every day. 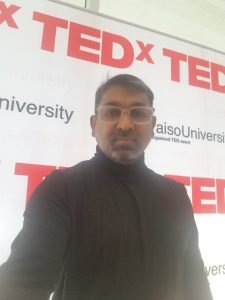 Immanual Joseph is the founder of Compassionleaders, and a bilingual author of seven books, including his most recent book—“The Fifth Revolution ''—which details compassion practices that can change organizations from the inside-out.

Early in Immanual’s childhood, his family instilled in him the idea that education was the only way to rise above their modest circumstances. Learning became an integral part of his psyche, and a core part of who he is. As well as working in the field of compassion, he is, himself, an educator, working as a high school science teacher for at-risk students in Frisco, Texas.

For his own education, Immanual obtained his PhD in Biochemistry from the Tulane University School of Medicine in New Orleans. He went to work as a cancer drug discovery scientist, and although it was a role he performed with excellence, there was always something missing for him. He realized that he needed to stretch beyond science, and find a deeper meaning and purpose to life.

The truth was, Immanual had always been afraid of old age and death. He chose to leave behind science and face his fears head on by starting an in-home care service for seniors. He successfully ran this for three years and learned a lot, but witnessing suffering and death in close quarters took its toll on him. During this time he discovered the healing grace of compassion and this was a turning point that transformed the way he saw life forever.

Immanuel realized that tapping into our true compassionate nature is a skill that we can each cultivate, but we are often afraid to, because of the many limiting beliefs we have around compassion.

He came to understand that these limiting belief systems are especially deeply rooted in organizational settings, and changing these beliefs, to create a more compassionate environment, creates positive human outcomes, as well as positive business outcomes too. This realization led him to create the '9-Pillars of Workplace Compassion',  a framework that he has used to teach compassion skills in organizations such as Salesforce, Amazon, HSBC, Box, and Toyota among others.

Immanuel’s personal practices rely heavily on metta (which is the practice of loving kindness) and also on gratitude. He believes that real change can be created through tiny practices, including the practice of microcompassion - which are tiny, consistent, deliberate everyday acts of compassion prefaced by a simple question: 'How can I bring more compassion to my current experience?”

He was invited to share his ideas in the form of two TEDx talks: one on the topic of compassionate leadership, and the other on creating a brighter world through acts of microcompassion. 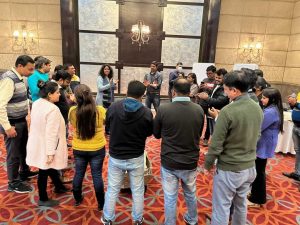 Rakhee Sharma is a mindfulness practitioner and executive coach. She is passionate about helping entrepreneurs and enterprises build leadership through culture, community, and compassion.

Many of her teachings are inspired by her beloved grandfather.

Rakhee grew up in India as part of an extended family. During the partition of India her grandfather—V.N. Sharma—a very respectable man in her community, welcomed two families to live under his roof. He shared his wisdom with the words he spoke, the actions he took, and the values he lived.

Each morning he would rise at 4:00 am for his morning prayers. He would spend an hour extending loving thoughts and energy to everyone he knew. It was Rakhee’s grandfather who taught her earliest lessons on compassion, a practice that would greatly inform her life moving forward in ways she could never imagine.

2006 was a time of inner turmoil for Rakhee. She faced a lot of personal challenges and spent a lot of time questioning the state of the world. At this time she attended her first personal development program that started a conscious journey inward.

Four years later she felt called to make a shift from the marketing and business branding work she had been doing. She attended her first coach training with the intention of making a positive impact in the world, much like her grandfather.

Rakhee has a strong interest in education and children. She is the India Education Lead with Charter for Compassion, a non-profit that exists in 54 countries. In partnership with them, Rakhee would go on to be the lead facilitator for the first compassionate city in India. Since then she’s worked with many different non-profit organizations to bring compassion based curriculums to schools across India.

In 2020 she experienced her next big shift during Covid. She noticed there was so much suffering and trauma happening in the world and she wanted to help. She created Showers of Compassion, an online global program aimed to support the wellbeing of patients, their family members, healthcare workers, and of those who had lost their loved ones due to COVID.

Rakhee believes deeply in the ancient Indian philosophy of 'Vasudhaiva Kutumbhakam' - which means - the world is one family. COVID presented her with an opportunity to live into that wisdom.
Her vision was born - a global collective to make compassion, connection, co-creation and resilience the most important currencies of our world, and to provide healing and support to one another.

Today Rakhee is a coach and facilitator who supports business leaders in exploring their huge reservoir of untapped potential. Together they create a collaborative, creative, and compassionate business culture. Her clients include Microsoft, Mayo College, Rolls Royce, and many others.

She’s also a Global Goodwill Ambassador and was recognized for her humanitarian work. 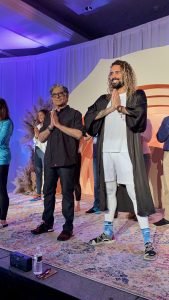 Sah D’Simone is a yogi, mystic, and artist. Born in Brazil, Sah struggled to find acceptance as a queer, colorful child in a society conditioned to cherish sameness. At age 16, he immigrated to the US with his family. By his early 20s, he found great success in the world of fashion as co-founder and creative director of an international fashion magazine.

Despite living what he always considered the American Dream, he found himself addicted, anxious, depressed, and terrified of what might happen to him if he continued down the same path. The American Dream became his biggest nightmare! Desperate for physical and mental recovery, he left his position at the magazine and walked away from the fashion world in 2012, leaving everything he worked so tirelessly for behind.

In 2013, he embarked on a voyage of self-discovery and quest to heal his body, mind, and heart. In 2014, Sah journeyed to Nepal, India, Thailand, and Indonesia to study with great masters while living in ashrams and monasteries. He took a deep dive into silent meditation retreats, committed to healing himself.

At first, spirituality felt like playing make-believe. He got caught up trying to emulate the modest and low-key persona that is often associated with spiritual seekers. But as he started to tap more deeply into the teachings, and unravel the misconceptions of how he expected enlightenment to appear, he realized how inauthentic it felt to repress his own naturally playful and sassy personality. He had turned down the volume of his fabulousness so low he barely recognized himself.

Sah studied with experts like His Holiness the 14th Dalai Lama, Lama Zopa, and countless other spiritual masters and healers. He noticed that the time he spent with his most beloved teachers always overflowed with laughter, joy, and effervescence. He found clarity in the realization that spiritual practice should be a joy-filled experience!

Sah abandoned the notion of “zombie zen” forced seriousness in his practices and began to pursue awakening in the form of ecstatic living – allowing his authentic sass to enhance his experience and teachings.

His teachers took note and encouraged him to a path of leadership. Sah devoted himself to crafting a modern, revolutionary approach to healing rooted in ancient techniques, yet enhanced by authentic, approachable updates – and he’s determined to share this heart wisdom far and wide.

Sah has shared his wisdom with some of the largest organizations and celebrities on the planet, including Google, Cardi B, Kanye West, the United Nations, and more. He’s also a TEDx speaker, host of the top-rated podcast, The Spiritually Sassy Show, and author of two books, Five Minute Daily Meditations, and Spiritually Sassy: 8 Radical Steps to Activate Your Innate Superpowers.

Sah’s teachings have helped enrich the lives of millions of people, and are inspiring a new generation of change-makers. Deepak Chopra called Sah a “radical spiritual guide, igniting connections among his generation.”